Got some tutuors to look at curious room project so far – the landing page was criticized for not having a navigation bar and looking a bit bare. Thinking I had some time I decided to put a navigation bar with no links into to see how it looked. This was a bad move it was confusing on two levels:

– Listen to my gut instinct MORE. Stop relying on the opinions of others.

– I need to learn every style rule about CSS, it is unpredictable when i am not 100% on what exactly something is styling. When i know exactly how the CSS is styling I have more control over what I am rendering on the page.

So last week due to this major hiccuip it took me a full 24 hours to rectify in css, codeigniter and to test it to see if it worked. I will not put the fix up here but it is working. It was simple but tricky!

THis is what I got working last weekend.

I did this by using an example project from the php class and I am using this code as base code to get my project working. There are good features in the code and my hope is to get some more functions working for Curious Room around them. 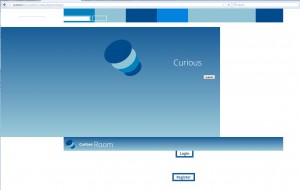